I’m back with another Studio Ghibli film review!! I’ve gotten so much positive feedback from my other review on “When Marnie was There”and decided to write another one! I’ve just finished watching “Kiki’s Delivery Service” which has always been on my to-watch-list and so today I had time to finally see it. Here’s a short review and some concepts I grasped after watching this wonderfully produced film~

Plot: A 13-year old girl named Kiki is a witch who sets out to another town to settle down. According to witch tradition, whenever there is a witch who is 13 she is to leave home and find another town to train in for a year. Kiki finds a huge town near the ocean and meets a wonderful couple who owns a bakery that allow her to stay in their attic. Kiki decides to open a delivery service to find her talent and as a way to earn a living.

THOUGHTS: I found this film so cute! Kiki’s big red bow and dress made me want to dress up just like her, even tho. I don’t think I’ll look as cute as she did XDD. Her cat, Jiji, is seriously one of my new favorite characters from Studio Ghibli. He’s a small black cat and that amount of sass he has, just reminds me of myself haha. That attic she lived in is … so cool!! For an attic, that is so big! I mean there’s a kitchen and fireplace there along with the bed!! Kiki is also so intelligent! She can clean, work the old type of ovens, and just take care of herself. I’m only a few years older than her and I admit I cannot do that. She gives off such an independent vibe and that you should not always depend on your parents. I can also tell that she is a kind person since she does not take money people give her when she did not complete her job yet and she helps the elderly. As always, the art and the way it was produced was so breath-taking. I consider Kiki’s Delivery Service one of Studio Ghibli’s classics and it truly does seem that way to me. However, I would not consider it one of my favorites since not much happened, but I do not regret watching it!

Throughout the movie, I found many hidden themes. In particular, one would be growing up. At the beginning of the movie, Kiki was portrayed to be a cheerful carefree girl. She seemed not to mind living by herself, and if that was me I would find it absolutely terrifying to live by myself at 13!! She just seemed to not have a lot of worries and to be honest, I was a bit jealous of that. But, as the story progressed Kiki seemed to start having emotional problems. She shut herself in when she wasn’t feeling well and it turned to the worse when that caused her to lose her powers! She also seemed to have a bit trouble with some kids her age and as a fellow teenager, I could understand her feelings. Some days I would feel great, but other times, I would feel tired and distance myself. This showed Kiki’s character growing up and her adapting to her own feelings and knowing her limits.

Another theme I found was finding yourself. As mentioned before, Kiki started to lose her powers and that was because she felt alone and not needed. As depressing as it sounds, it was kind of like she was living just because time was passing. However, all this changed after meeting again a painter from the woods. Kiki spends the night at her new friend’s place and pours all her feelings out. Her friend tells her a similar story about herself and one instance when she couldn’t paint either. The painter reveals that the reason was because her spirit wasn’t there anymore. Kiki did not find delivering fun anymore and until she does it for herself instead of because she has to, she’ll start feeling better. As the audience we learn that we should not do something just because we are forced to or for someone else, but rather for our own benefit.

-These were just 2 of some of the important themes I found strikingly evident and I am sure there are many more. I did enjoy this film and after watching this it just adds to how awesome and great Studio Ghibli just is. This film made me realize how much I miss Hayao Miyazaki, but I know Studio Ghibli will do just fine without him. So will you watch it or have you already? Pls. leave a comment below, like, and follow!! Thanks for reading! 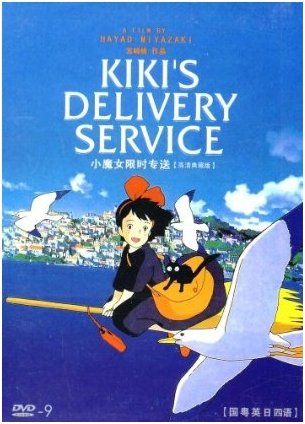 14 thoughts on “Kiki’s Delivery Service: Transition to Adulthood and Finding Yourself”