Hey guys!! I’m finally back with another drawing. This week’s drawing is a fan art I made for a friend’s birthday. This techinally isn’t an old drawing as I only drew this last week, but I just wanted to get it out there^^ If you’re an SAO fan or not, keep reading!!

So my friend is a pretty big SAO fan and she also is an anime fan( although I would say I’m more of one than her ^_~). Tbh, SAO wasn’t the best. I thought the first season (first arc) was pretty good. I loved Asuna and Kirito cuz they were so cute and the story line really struck me. Being trapped inside a game and needing to find a way out was such a good plot and the characters involved made it awesome. And when they finally found a way out, I found it beautiful. But then… They introduce the second arc. I’m not exactly sure what it’s called so I’m just going to call it the fairy arc. The second arc was ok, just a few complaints. I watched SAO way back so I don’t remember all the character’s names, but I remember there being this older man that captured Asuna? Yeah I remember thinking him to be the biggest perv. Sighhh and Asuna looked so weak there. She was so bad-ass the first arc so what happened?!?

Let’s not get started about the second season. I was sooo confused watching it. To keep it short, why the hell did they make Kirito’s hair so long?? And what’s up with the gun story? Everything was so bad and kind of boring. No offense if ur a big fan, but it just was not good. It seemed like they ran out of ideas and just sticked things in! If they ended with just the first arc or even the first season, it would have become a much better anime with a better reputation.

Ok, I just realized this is going to be a longgg post, so I’m just going to head to the drawing now. I drew this on watercolor paper and sketched it with pencil first. I looked up a reference online so if you look it up on Google, you’ll see it. Sketching took me about an hour and at first I wasn’t sure if it’ll end well, but it did. Then I headed on to watercoloring. I’m just an amateur using watercolor so I apologize if it looks bad. This part took me around 2 hours. I also outlined a few parts with those lining pens. I learned that it’ll look more natural and better if you outline only a bit of the drawing and not the entire picture.

Here’s a picture before watercolor: 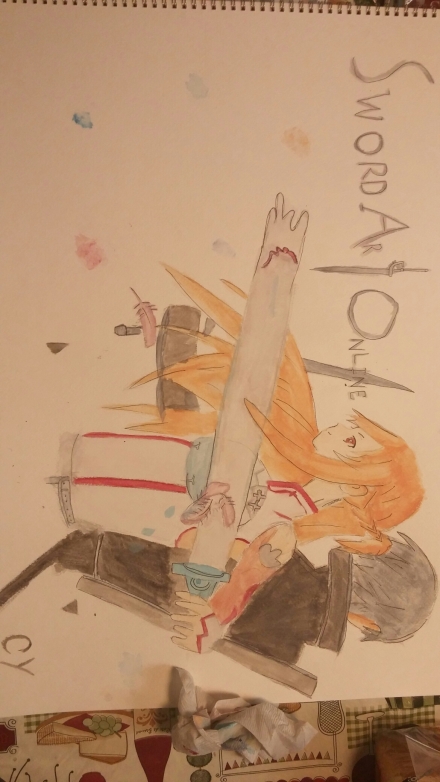 -So what do you guys think? Sorry for the long rant before and thanks for sticking by to read this long post. Leave a comnent below, like, and follow!!

I’m going to take this space to write about the things I’m thankful for since today’s Thanksgiving. I’m thankful for my family, their support, my friends, the house I live in, being able to attend school even tho. I hate it, my computer and phone for being able to write this blog and of course to all my readers even if you just magically ended up here. Thank you for reading all my posts and sending me your support. I know this blog is so small and there’s so many bigger blogs than mine, but I’m just so grateful for anyone who reads any of my posts. Thank you from the bottom of my heart <333. I’ll try my best to expand and make this blog even better. And of course to update more, I’ve been so inconsistent with posting T^T. Anyways… THANK YOU!!!