Hey everyone! Welcome back to Pokemon Spotlight Sundays! This week we’re looking at the cotton ball that is: Whimsicott. 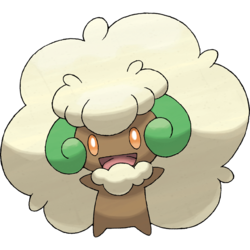 First, let’s admit it: Whimsicott is pretty cute. That huge smile and cotton hair really do it for me. It just looks so cuddly!

Whimsicott is a little more viable than last week’s Pokemon, Lilligant. It’s an extremely gimmicky Pokemon. Here’s what makes Whimsicott so good: Prankster. Prankster is an ability that makes any non-attacking moves go first. It also gets great anger-inducing non-attacking moves, Encore and Substitute. Encore will make your opponent repeat their last move for three turns. This allows you to “trap” any Pokemon that try to set-up on you, such as a Pokemon with Dragon Dance or Swords Dance. Can you say infinite Dragon Dance? Dragon Dance and Swords Dance both raise the users attack, Swords Dance by two stages and Dragon Dance by one stage. Dragon Dance also raises the user’s Speed by one stage aswell. Using Encore after your opponent uses one of these moves will trap them, making it so that they can ONLY use those moves for three turns. You may be asking “But what about when the encore ends? Won’t they one shot you?” Here’s where the next two moves come in: Substitue and Leech Seed.

Substitute takes away 1/4 of your HP (Hit Points) to create a “Substitute” which will take any hit. You can use this move to set-up and become protected, or to see what move your opponent is going to use. This helps you a lot, considering Whimsicott is a Grass/Fairy type as of Generation 6. This means that it is has a 4x weakness to Poison. If you don’t know what that means, it basically won’t live a poison type attack. It’s also weak to Ice, Fire, Flying, and Steel. You can use Substitute to see if your opponent has any life-threatening moves, such as a Poison type attack. The next move is Leech Seed. Leech Seed when used will drain your opponent each turn, stealing 12% of their HP and giving it to you. Leech Seed cannot be used on Pokemon that are Grass Types or that have the ability Sap Sipper. This paired with Substitute will make Whimsicott a force to be reckoned with, making it a hard Pokemon to knock out when it is set-up correctly.

Your fourth move is Moonblast, which will basically just allow you to have an attacking move, great for those turns where you already have a Substitute up and your opponent is Leech Seeded and Encored. Let’s look at Whimsicott’s stats.

Overall, Whimsicott’s stats aren’t really the best. Its best stat is Speed, which is decent, but almost irrelevent with Prankster. The only use you’d get out of it is outspeeding a few Pokemon when you use Moonblast. Its defenses are similar, but Physical Defense is higher.

What are EV’s you may ask? Basically they’re points that increase a Pokemon’s specific stat. We’ll go into more detail next week because this post is already getting really long.

And that’s pretty much it. Just do the usual tricks: Encore stat increasing moves, Substitute on potential threats, and Leech Seed EVERYTHING (except certain Pokemon of course) and you’ll be ok.

Have fun annoying your opponents! Stay tuned till next week when we’ll review a Mega Pokemon: Sableye. Thanks for reading!