Today’s post is on the korean drama “Hello, my Twenties” aka “Age of Youth” 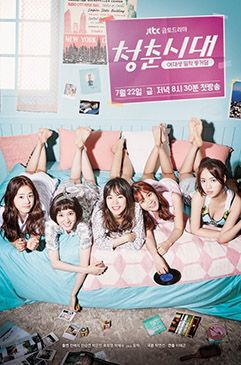 Plot: 5 girls are in their twenties and they each face a different problem. Han Jin-myung is a 28 year old who actually dropped out of college and is handling 2 or 3 different jobs at the same time for financial reasons. She works many jobs in order to pay for the hospital fees for her younger brother who has been in a coma for many years. Jung Ye-eun is a 22 year old girl who is foolishly in love and is afraid of losing her boyfriend so she often gets jealous and does not tell others how she feels. Song Ji-won is a 22 year old who is desperate to find a boyfriend. She claims to be able to see ghosts. Kang Yi-na is a 24 year old who is a prostitute. She sleeps with many men for money so that she could live an “easy life”. Eventually, though, her life is put into danger. Lastly, Yoo Eun-Jae is a 20 year old (also the youngest) who has a timid personality, but a dark past. These 5 girls live together in a building called “Belle Epoque” and learn about each other and themselves better. They go through problems together and learn the lesson of moving on with each other.

THOUGHTS: Whew! That was a long plot! There are so many different issues that go on during the drama (some which I didn’t even include b/c of spoilers!) so you all know this is an impacting drama that may hit you in the feels! First of all, I would like to talk about the wonderful and beautiful lighting and production of this drama! It was so on point and made the show so enjoyable. At first, many of you many expect this to be a happy-go lucky drama about 5 girls falling in love (which some of it does happen), but do not be mistaken, there is a deeper story behind each girl. It makes me shiver just thinking about a few of them.

Characters: These girls come a long way and I mean long! When you first meet them, you discover their issues, but at the end, most of these problems are resolved! I must give these girls props! Although there were many times where I just wanted to shout “Oh, Come on!” to the screen, eventually they each have a “happy” ending and grow from their experiences. I mean this made me want to live in a suite with other roommates. I was jealous of their close friendships T^T (I’m tearing up).

Music: The opening song is so cutesy (at least I thought so) or I guess “country song-like”? I don’t know, but I liked it and it fit the drama well. Tbh, I don’t really remember any other songs, but I guess I could just take that as a sign that this drama matched their songs well.

Ending: I did kind of hint it in some of the above parts. Yes, everyone mostly gets a happy ending. They all also learn from each other and accept their flaws.

-Well, I hope some you go watch