I’m finally back with a k-drama review and it’s on the popular Korean drama that stars Yoo Seung-ho, Kim So-hyun, Kim Myung-soo (L from Infinite~), etc. 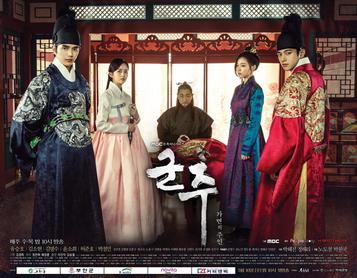 (**Image is not mine. All credits to owners)

Plot: The story starts off with the naive ignorant crown prince Lee-Sun and he meets a girl named Han Gaeun and a lowly boy named Lee-Sun (the crown prince and commoner have the same name). They befriend each other before a tragedy happens with Han Gaeun’s family due to a group named Pyunsoo who is hungry to gain power and control the kingdom. The story is about the prince, Lee-sun, and his fight against Pyunsoo; he learns to become just and a good leader along the way.

This was my first time watching a k-drama with episodes that was only 30 mins long (I usually watch 1hr. long dramas) and I enjoyed it. Sometimes dramas get really boring with 1 hr. long episodes and with this drama, everything seemed to go by really fast so I was entertained all the way! I don’t know, was it or is it a trend to make dramas 30 mins. long now a days? I’m currently watching “The King Loves” and each episode is also 30 mins long with a total number of 40 eps. (the drama is so far so good #teamking all the way).

I get into a drama based on how the beginning of the story is executed and this drama had me hooked. It showed a perfect blend of romance, political, and suspense. Since I had watched this drama as it was airing, I had to wait weekly for new episodes and that killed me! I truly believed this was a great drama.

I heard that this was supposed to be the new “Moonlight Drawn by the Clouds” based on a similar story plot and time zone, but apparently, “it was a disappointment”. It was only able to gain an average number of viewers despite the heavy advertisement beforehand. What I don’t understand, is how?? Even though I haven’t watch “Moonlight Drawn by the Clouds” and therefore can’t compare them, I still believed this was an awesome drama with the an amazing story line, actors, etc. Even the music was beautiful! So I seriously cannot believe not a lot of people watched this because I believe this drama is so underrated.

I’ve been a fan of Kim So-hyun ever since I watched her in “Who Are You: School 2015” (which will always remain one of my favorite kdramas/ I think it may be #1 actually) so I was excited to see her star in this one. I read that she got this role after her appearances in Goblin as the young queen and I agreed with the reactions that she got. She really does fit the historical roles very well and her acting is great~

Even though I shipped her with the Crown Prince throughout the drama, I fell in love with Kim Myung-Soo (or aka. L from Infinite) early into it. His visuals are everything!! But besides his looks, I think he did another great job as the second lead. As for his character that he played, at first he was so loyal but then something happens and he loses track of what is right from wrong, but in the end he makes the right decision so there is growth in his character.

This was my first time watching a drama with Yoo Seung-ho in it and like the other actors, I think he did amazing as well. I definitely will keep him in mind while I watch dramas and may even watch one for him! The crown prince in the story line, grew the most. In the beginning, he believed that he had a lot of power as Crown prince (which technically he does I guess), but he did not know the consequences that came along with it and was naive. However, after many death (unfortunately), he decides to change for the better and becomes strong and powerful.

There is another female lead (second lead tho.) named Kim Hwa-gun who is the grand daughter of the leader of Pyunsoo group in the drama and she is played by Yoo So-hee. For once in my life, I actually did not find the second female lead annoying at all!! Yes, she does fall for the main male lead, the crown prince, but all she wanted to do was to help the crown prince! I often times even found myself rooting for her. As I watched the drama, I also read some comments below and some even said they preferred her over the main female lead since Hwa-gun was “bad-ass” and actually does something along with giving a strong female vibe.

This drama has some of the nicest hearing songs. They have ost’s song by Yang Yoseob (from the group now called ‘Highlight’), Kim Yeon-ji, K.will, ZIA, L from Infinite, Kim So-hyun as well, etc. But the very song that got my attention was song by Lovelyz’s Kei called “Star and Sun”. It was soooo good and I replayed it soo many times! I truly believe this drama has one of the best osts’!

Uhhhh, my mind is a little fuzzy about the ending since I watched it weeks ago, but it was sad since many more people (and characters) die. However, all ends well and Lee-Sun becomes a great King with Han Gaeun as his queen (not really a spoiler, very obvious).

-So that is all for this drama review for “Ruler:Master of the Mask”. I enjoyed watching it and I hope some of you will check it out as well! Pls. leave a comment below, like, and follow! Thanks for reading!! Annd follow @kpop9019 on Insta!